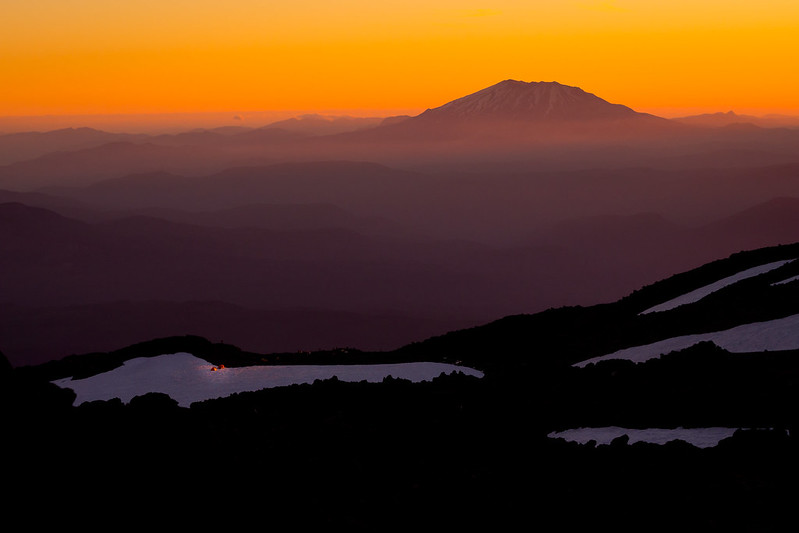 On a windy night in July of 2011 we spent 8 sleepless hours at 9,000 ft on Mt Adams, laying on our backs hanging on to the tent poles to prevent a collapse, wondering if we were going to be blown away like a lost kite. It was a huge snow year and we had made the climb to the lunch counter under a hot sun, walking on snow all the way from Morrison Creek, 3 miles before the summer trailhead. The wind pelted our tent with sand all night, and in the morning we abandoned our climbing plans and retreated.

In 2013 we finally went back for another try. Ethan was eager to join us, and we were confident in his ability to handle the climb. The conditions were a stark contrast to our previous attempt. We met our friend Nate in town early on a late July morning and drove to the Cold Springs trailhead. We were on the trail at 10am, and cruised up to the lunch counter in 4 hours on mostly bare ground in comfortable sunny temperatures. The lunch counter was busy, but we scored one of the best campsites, just below the top of the highest rocky outcrop, well protected by natural and man-made rock walls. We spent the afternoon and evening hours relaxing in the sun and enjoying the views. The sunset was spectacular, one of my best photography experiences of the whole year. Watching the umbral pyramid of a mountain is an incredible experience that never gets old. We bivied (no tent) in near windless conditions, arising at 5am for the climb. We made good time up the moderate slope of Pikers Peak, watching the mountain's shadow a second time as the sun rose. The snow was firm, but not icy. Ethan's micro spikes were fine, and our crampons overkill for the easy climbing. We regrouped at the top and had a snack before the traverse over to the summit cone. Half way up the summit cone, at around 12,000 ft, Ethan sat down and said he'd had enough, he wanted to go back. We talked him into another snack while he rested, and gave him a little encouragement. It didn't take long for him to decide he was ready to go see the summit. A few minutes later we found a hole in the snow with a rushing torrent below. He had great fun hacking at the hole with his axe, and was in good spirits again. The summit was busy, and at least a dozen people asked to shake Ethan's hand or pose for a photo with him. He enjoyed the complements and attention. He then set to work chipping at the ice surrounding the burried remains of the old lookout cabin, and probably would have been content to hang out there all afternoon. There was a moderate wind blowing on the ridge, but it was a remarkably pleasant day as far as summits of volcanos go. The return trip to Pikers Peak was easy. From there, the standard descent is a 2,000 ft luge run down a glissade trench. I've always hated butt glissades, greatly prefering a standing glissade (even better - skis). The appeal of sliding on one's butt down a hard bumpy trench on abrasive summer snow is lost on me. The softening snow, large suncups, and modest grade made a standing glissade impractical, and walking difficult. With careful supervision, we let Ethan try glissading. He did fine, so we got in and went a couple hundred feet before we couldn't take it any more and got out to walk. The walking was awkward so we got back in the trench. This was repeated all the way down. It was slow and unpleasant, and the only challenge of the whole climb. Having just climbed and descended 3,000 ft, it was time to pack up camp and make the 4,000 ft descent to the car. But not before celebrating with the Beers Nate brought up. Ethan was still doing incredibly well, and we passed a couple of other parties on the way down. By the time we got back to tree line he was getting tired. Nate kindly held his hand the last couple of dusty miles, keeping him from falling when he stumbled, and chatting with him to take his mind off the walking.

Another accomplishment we're so proud of Ethan for. He remains remarkably motived on these trips, and he was faster than many of the other groups on the mountain.